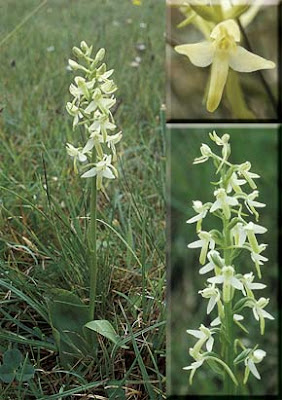 [The Lesser Butterfly orchid]
.
The following Advertisment is from the Observer of Sunday May 22 1825: "Just published The Speech of his Royal Highness the Duke of York in the House of Lords the 25 April 1825 Printed by J. Whittaker (with the same splendour as the account of the Coronation of his Majesty) in letters of Gold on the finest cord paper price 10/6 Sold by Septimus Prowett 23 Old Bond Street.

* In his copy of Isaac Eraerton's Treatise on the Culture of the Auricula, Clare has written a list of 'orchis's counted from privet hedge'. But among the twenty he mentions there is no 'piegon' (Clare's usual spelling for 'pigeon') orchis. Nor has Mr. Ernest Colman, the Peterborough botanist, ever heard, locally, of 'pigeon' orchis. The only white orchis is, of course, butterfly orchis, though sometimes spotted orchis is white, with small coloured markings. Or had Clare misheard Henderson's possible abbreviation of pyramidal—'pyram' (pyramidal orchis is occasionally nearly white, too) and not yet seen it written ?
Posted by Arborfield at 08:28