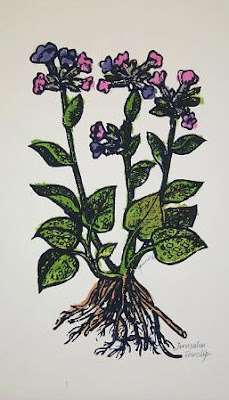 Returned the proof to Hessey wrote a note to Hessey & one to Mrs Wright of Clapham accompanied with some flowers viz—'Lilies of the Valley' 'Shepherds Goldilocks' 'Jerusalem Cowslips' 'Yellow flowerd yarrow' 'Lilac flowerd Cranesbill' 'Black flowered Cranesbill' & 'Pencil flowered Do. —Read a continuation of a good paper in the London on 'A poor Students struggles thro Cambridge &c' the rest are moderates among the middlings
.
I Wonder, did Clare actually send the flowers? If so, how? Must have been an interesting package!
.
The story is told (somewhat apocryphal I think) that while Mary was on her way to Jerusalem to present Jesus in the temple she sat down at the edge of the road to nurse her Son. The spotted cowslip was growing at her feet and its blooms turned blue as they reflected the blue of the Blessed Mother's eyes. Her eyes filled with tears as she thought of the poverty and future suffering of her Child and the buds of the flowers grew pink as her eyes reddened from weeping. When she moved the Infant Jesus from her breast a few drops of her milk fell on the plant, spotting the leaves which have ever since borne the white markings of her milk.
.
I grow them in my garden...
Posted by Arborfield at 08:30