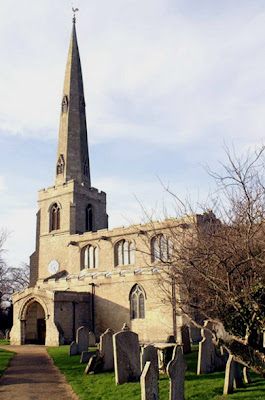 [Glinton Church]
I am writing about the more or less penniless John Clare, whose publishers have sent him a dateless “Student’s Journal” in which they hope he will make notes for a natural history book rather like that written by Gilbert White. It has no printed dates; so Clare can start it in September.
.
He is ravished by its paper. Being prolific, he has never possessed nearly enough paper for his needs. Those who could well afford to do so never think of giving him a ream or two. Instead, they give him ad­vice. And when finally he collapsed, the Lunacy Board put it down to covering too much paper.
.
Before this tragedy, Clare got out. He walked the fields and woods. He socialised in the pub. He would, on a fine day, lie low, and, out of the eye of the labouring world, would be out sensuously watching butter­flies, or sniffing wild flowers. Sometimes with a girl.
.
Those who understood money doled out his slender royalties in case he blued them all at once. The seasons passed; the Glinton bells rang; the new profitable farming wrecked his village; the boardrooms had him in mind. Having read and met Hazlitt, he refused to stick to poetry, and now and then went into the economy-protest business, showing more knowledge of money than he was entitled to — not to say nerve.
.
The clear white pages of the “Student’s Journal” grew dark with ink....
Ronald Blythe ~ Church Times
20 February 2009
Posted by Arborfield at 17:00